The online audience monetisation specialist sets up its secure payment platform. Membership of GIE Cartes Bancaires is a winning argument in recruiting firms and individuals selling goods and services on line.

An Internet company… This Friday, 24 June, the highly select GIE Cartes Bancaires organisation, to which France’s principal financial establishments belong, welcomes a new and by no means typical member: Rentabiliweb. After two years of persistent effort, the company founded by Jean-Baptiste Descroix-Vernier at last enters the holy of holies, co-opted by BPCE. “Welcomes” is perhaps not quite the right word: the French banks have done their utmost to delay application of the European directive on payment services, intended to bring new players into the market. 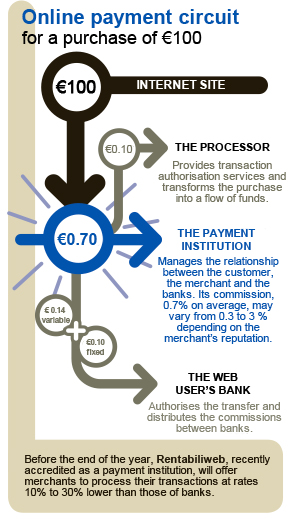 French pioneer In other parts of Europe, dozens of payment organisations have been set up since the new regulations were introduced in 2007. In the United Kingdom alone, there are now as many as eighty, and there are forty or so in Luxembourg. In France, there are only six, each operating in a specific field. Rentabiliweb is one of this number, and its teams are in a more rebellious mood than ever before. The troops of Iliad-Free must have felt much the same a decade or so ago. “In financial services, we are experiencing what telecommunications were going through at that time”, says Thibaut Faurès Fustel de Coulanges, general manager of Rentabiliweb. At the beginning of 2011, the company was the first payment establishment officially approved by the Banque de France to take payment by specialised banker’s card on line. The rise of these new companies in the area of e-commerce-related payments is upsetting vested interests and encroaching on protected territory. Until now, the French market in online financial transactions was a special preserve of the banks, and particularly two of them: Société Générale and Crédit Mutuel. By obtaining accreditation in France, where its secure servers are located, Rentabiliweb, specialising in online audience monetisation, will be gaining access to the whole European Union market with its tens of thousands of e-commerce websites. By becoming a member of GIE Cartes Bancaires, the company will be able to stick a finger in their private pies and refine the services it offers online traders, probably before the end of the year.

Financial solidarity  The competition is observing Rentabiliweb’s first steps in this direction with great interest. At PayPal, a subsidiary of e-Bay specialising in electronic payments, they are trying to play down the arrival of this troublemaker. “It is quite normal that players such as Rentabiliweb be granted a licence”, explains one PayPal manager. “For our part, we are seeing new initiatives launched every week, evidence of the vitality of the payments sector.” But the Descroix-Vernier team is already putting forward some solid arguments. During the winter, the Rentabiliweb boss invited thirty or so investors to visit a major data centre located in the Paris region. His aim: to convince his guests that Rentabiliweb has the resources to make good its ambitions in the cyber-payments sector. His enterprise, with turnover of more than 90 million euro and annual growth of over 30%, is currently the darling of the markets. It has come through the recession unscathed and, in the last twelve months, its share price has climbed by more than 70%. Security is the key aspect of Rentabiliweb’s strategy where online payments are concerned. “The moment when an Internet user has to type in his banker’s card number to make his purchase is a psychologically important stage in the process: 32% of online buyers break off the transaction if they encounter a problem when making payment”, explains Thibaut Faurès Fustel de Coulanges. The group claims that it is already “more than satisfying the security regulations prescribed by the Monetary and Financial Code”. To begin with, the company says it can offer users a fluid and transparent experience: goodbye to the ugly and disturbing page that appears when you proceed to make your purchase. “We are already doing this on the dozens of sites we operate in house at Rentabiliweb, and we are quite capable of doing it on account of third parties”, says Jean-Baptiste Descroix-Vernier. 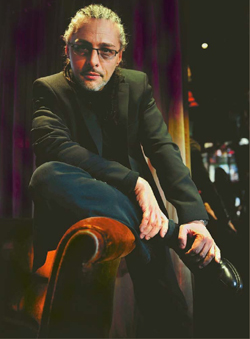 A competitive approach  Above all, the newly fledged payments establishment hopes to benefit from another of its advantages: its small size. With just 200 employees (his “ninjas”, as Descroix-Vernier calls them) based in Europe, Siberia and the United States, the company’s costs are much lower than those of the major banks. “We are in the process of finalising our terms and conditions, but clearly we shall be offering online traders rates that are lower than those currently practised”, affirms Philippe Bontemps, deputy general manager of Rentabiliweb Europe, recently recruited to develop the firm’s monetisation business. Rentabiliweb should be able to bring down prices by between 10 and 30%. “And online payment will no longer be a simple commodity, as it is today”, promises Thibaut Faurès Fustel de Coulanges. Because Rentabiliweb will be able to rely on its original know-how in persuading online traders to sign up. Since it was founded roughly ten years ago, the company has based its reputation for monetising the content of web sites on more accurate knowledge of the visitors to such sites. In managing the financial transaction stage of the sales operation on their behalf, it will be able to provide traders with an increasingly subtle profile of the people buying their goods and services.

Big-name backing Website owners still need to be persuaded to cross the Rubicon, to break their comfortable ties with the banks and entrust a crucial part of their business to this upstart newcomer. Here again, Descroix-Vernier has a secret weapon: his shareholders, who include Bernard Arnault, François Pinault and Stéphane Courbit. Not that he goes running after celebrities. But, through them, he can count on the custom of such powerful brands as LVMH, Fnac and La Redoute, as well as some big names from the world of online games, to give him a leg-up. And Rentabiliweb will have to move quickly: the American giants are waiting in the wings. Facebook is promoting its virtual money. Amazon has its virtual portfolio solution, while Google and Apple are betting on their own technology. Rentabiliweb is definitely up among the big boys.